Game of Thrones has lots of little ironies that are just so interesting. George RR Martin is certainly an interesting writer and has created some great bitter ironies in his story. Here’s a lit of the ironies.

Jon Snow Allowed the White Walker’s Through The Wall 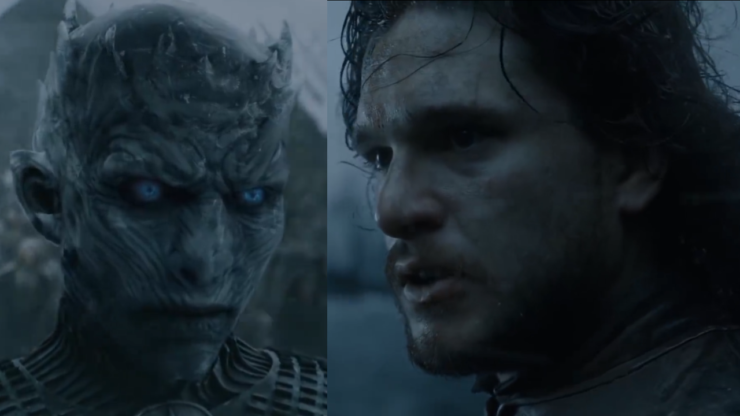 They all should have just listened to the advice of the Grand Maester from the Citadel and ignored the threat completely:

Jon Snow should have listened to Benjen and stayed home and married a woman.

I guess Jon Snow really does know nothing.

Things Didn’t Get Better Without Joffrey

Everyone hated Joffrey: the characters in the show and audiences alike. We’d expect his death to be a good thing and that many of the problems would go away with his demise, but if anything the situation worsened considerably despite the threats Joffrey created such as the Starks and Stannis having largely been defeated.

On many things Joffrey may even have been right. He was right about the threat Daenerys posed with her dragons. He may have been right about the idea of having a single standing army rather than splitting between the bannermen. He was even right when he said that Tywin was hiding when Robert won the war. It is actually disturbing how often Joffrey was right.

Eddard Stark Died for Nothing

All three of the illegitimate Boratheon-Lannister children were killed by enemies of the Lannisters. Now, you might argue here that if the war of the five kings had never started this would not have occurred, but it might have gone down the same as well.

Myrcella was killed in revenge for Oberyn’s death, and he would have come to the capital seeking revenge for his sister Elia Martell regardless of the war of the five kings. Tommen committed suicide and might very well have done something similiar without Eddard dying. Joffrey was inclined to make enemies and while the war of the five kings forced the Lannisters and the Tyrells together, it still might well have ended the same for him.

With all three of the Lannister-Boratheon children dead Stannis would have been heir to the iron throne. Maybe Eddard Stark should have just been quiet.

Littlefinger got Killed by What He Didn’t Know

Petyr ‘Littlefinger’ Baelish’s house words are “Knowledge is Power”. When Ros used the popular phrase, “what she doesn’t know won’t hurt her” Littlefinger responded, “A stupid saying, What we don’t know is what usually gets us killed.”.

The one thing Littlefinger definitely didn’t know of or consider in any of his plots was magic, he didn’t have any knowledge whatsoever about it and ultimately it is what lead to his death through Bran.

Jaime Lannister has all the appearance of a knight in shining armour but he has very few of the actual qualities. He is not humble at all, he is not polite and he sleeps with his sister breaking his vow. Yet all of these negative qualities no one really seems to care that much about, even when they know about them. In contrast the one good thing he did, killing The Mad King when he was about to burn everyone in King’s Landing, is what causes him to be hated and deridingly called Kingslayer. He was punished for his one good deed.

Also cool that Ned Stark judged Jaime Lannister for being a backstabber, but he himself backstabbed Arthur Dayne.

Ramsay Bolton and Robb Stark Refused a 1-on-1 Duel

Its interesting because in the case of Robb Stark doing it we were on his side and in the case of Ramsay Bolton doing it we were strongly against him, but both of them sacrificed their men. If Robb Stark had accepted Jamie Lannister’s deal he would have saved so many of his men’s lives and the outcome probably would have been death for him, but he ended up dead anyway.

Khal Drogo Died of An Infection

This is one everyone knows, but it is still so interesting. Khal Drogo died of an infection, the greatest and most powerful warlord died of an infection from a pillow. Its great because this is the sort of thing that does happen in history, such as the German Emporer Frederick Barbarossa who jumped into a river during the march to the Holy Land in the third crusade but ended up drowning because he forgot to take his armour off. Some have argued he had a heart attack because the water was only waist deep, but you get the point.

Jorah Mormont Was a Slaver, Daenerys the Breaker of Chains

Jorah Mormont was exiled from Westeros for participating in the slave trade in order to acquire money to keep his wife Lynesse contented. Inevitably he was not able to hold onto his wife who left him for another.

It is sometime in the period after this that he came into the service of Daenerys Stormborn, who is passionately opposed to slavery. Its such a great twist in his life that this should occur.

As an interesting piece of side trivia Lynesse and Daenerys are said to look alike.

Tywin was a great politician, a decent warrior and a good thinker. It was almost destiny that none of his children would be able to live up to him. The irony is that in some ways they did. Jaime Lannister got the battle prowess and athleticism, Cersei got the political nouse and cunning, Tyrion got the brains and booksmarts. Combined, if they had worked together properly, they might have managed to replace Tywin in the aggregate.

The prophecy that all of Cersei’s children would die made her overprotective and that seems to be the force that got them killed. Cersei really lives up to the devouring mother archetype. Joffrey was spoilt and so became a jerk, leading to the Tyrell’s killing him. Tommen was spoilt and became soft leading to him committing suicide when his wife and the faith, which he had been manipulated by, were destroyed by Cersei. Mycella was a bit of an exception but without Jaime Lannister’s interference she may have been protected by Doran Martell. If she had let her children grow up normally and kept her hands off matters a bit they may all have survived.

I’m sure there are a lot of other ironies that are going to be revealed in Season 8 and maybe I will update my video then. If you have any that you want to talk about by all means add a comment. Be sure to subscribe to my channel for more videos analyzing stuff, looking for hidden significance, stuff like that.